We just couldn’t help celebrating Wednesday with a camel photo.

These camels were part of the Ringling Bros. and Barnum & Bailey Circus that came to Cheyenne in about 1933. The circus train was unloaded at the Union Pacific yards and the animals were walked 2 miles up Snyder Avenue to Frontier Park where the circus tent was set up. Local amateur historian Edna Fish took the photo from her front yard. On the back she wrote “Wouldn’t you like to ride the front one?”

Today’s Friday Foodie feature come to us from the hand of Francis Eliza Chassell. In 1916, when she was 8 years old, she contributed her recipe for butterscotch candy to The Gillette Cook Book.[1]

Francis was born in Gillette and grew up on the family ranch. She taught in the county after graduating from Campbell County High School. After a couple of years, she decided to continue her education and attended Cornell College in Iowa, where she later married. Francis passed away in 2001.

Francis’s father Harry J. Chassell was a long time Wyoming legislator serving in the House of Representatives 1909-1913, the Senate 1915-1923, and the House again 1933-1937. Chassell introduced the bill creating Campbell County, which he later represented, in 1911. According to White Eagle, the publisher of the cookbook, Chassell remained grounded, despite his political career. “H.J. Chassell who helps his wife with a day’s washing, cleans stalls or brands calves, has served two terms in the legislature and one as State senator.”

Boil together a cup of sugar or maple syrup; 1/2 cup butter, tablespoon vinegar, 1/4 teaspoon soda. When syrup will snap when tested in water pour on buttered plates to cool.

Today’s Friday Foodie feature is not for the faint of heart in modern society, but anyone who has read Laura Ingalls Wilder’s Little House in the Big Woods is familiar, at least in passing, with the dish.

Head cheese is really not cheese. It is probably best classified as a luncheon meat, something akin to liverwurst or spam. Originally, head cheese was made after butchering to utilize all parts of the animal. The head and other scraps were boiled together, salvaging the small scraps of tender meat. The resulting slices are actually quite interesting to look at, with bits of meat suspended in a stiff, savory gel, similar to a stained glass window. 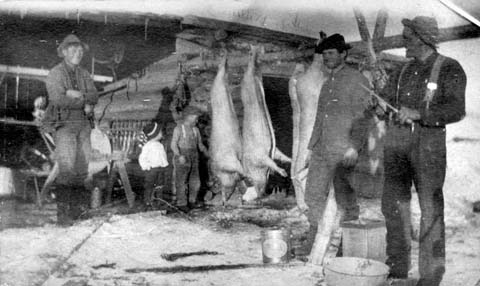 In 1914, The Presbyterian Aid Society of Evanston, Wyoming, included Mrs. L.E. Smith’s recipe for head cheese in their Evanston Cook Book of Tested Recipes. Clearly, Mrs. Smith’s recipe was designed for use by a thrifty city housewife. She utilized beef and pork shanks, which would have been cheap and easily acquired at the local butcher shop. Her recipe would probably also have created a more refined final product, suitable for club luncheons as well as family meals. The recipe would also probably come in handy only a few years later during WWI when food prices, especially for meat, would skyrocket. 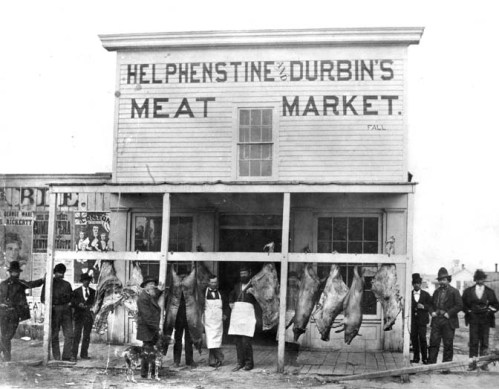 Before the advent of supermarkets, city folk relied upon their local butcher for their meat. Mrs. Smith probably would have purchased the shanks for her head cheese at a butcher shop like this one.
(WSA Meyers Neg 189, Helpenstine and Durbin’s Meat Market, Cheyenne, photo by Joe Shimitz)

3 pork shanks, 1 beef shank, boiled together, take out and boil fine; strain the liquor from the ketttle, pepper and salt to taste, then boil all together for a few minutes and put in a pan to set.

It’s that time of year again…time to refresh the display cases in the Reading Room! This time we are indulging in our artsy side, focusing on scrapbook cover artwork from the collection. The display includes examples of painted covers, fabric and handwork, commercial books and even wood and copper. They represent individuals and clubs from around Wyoming, each one as unique as its creator. Be sure to check them out next time you are in! 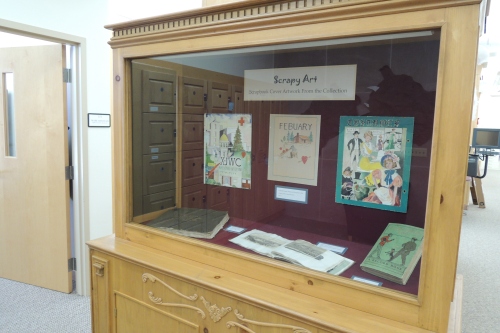