The United States Postal Service was established on September 26, 1789, making 2014 their 225th year in operation. How has the postal service impacted Wyoming? Let us count the ways… 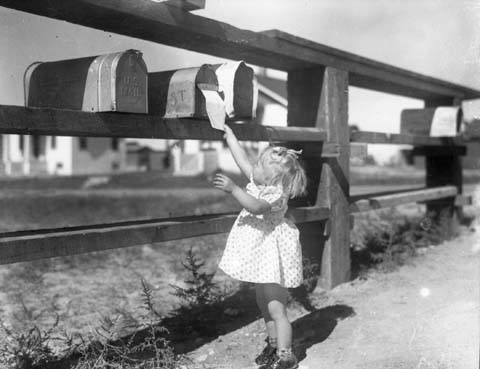 A post office was usually the only institution necessary to be considered a town in Wyoming. And thus many “towns” sprang up with a population of 1…the postmaster. And many died when the post office was discontinued. Take Birdseye for example. Originally it was a stage station, but it served as a post office from 1906-1913. The post master estimated a population of 50 in the area, but served about 200. Nowhere near 50 lived in the town’s 3 buildings and a lean-to.

Before phone calls were cheap and well before the internet, the mail call was something to look forward to.

Postmasters, like Perry Smith of Rawlins, were sometimes almost an institution in themselves. They kept the mail on schedule.

As technology advanced, so did the mail system. From sorting by hand to today’s automated sorting machines, the USPS continues to modify its mechanisms. But the sorting room has always been the sorting room.

And then there came airmail in 1918. And the main route went right through Wyoming, stopping at Rock Springs and Cheyenne, the region’s main air hub. (No Neg, Two US Airmail pilots and a plane)

Wyoming’s airmail beacons even inspired the 5 cent airmail stamp used from 1928-1930. The artwork on the Beacon stamp depicts a plane and an airmail beacon that closely resembles the one at Sherman Hill, between Cheyenne and Laramie. This was the highest beacon of the 1,500 on the route.

Old Faithful Geyser also inspired a stamp, which celebrated its first day of sale at the post office in Yellowstone. (Sub Neg 2747, Sen. Joseph O’Mahoney & W.H. Jackson at window of post office, Gov. Leslie Miller is behind the window on the left. July 30, 1934)

According to Gallagher and Patera’s book Wyoming Post Offices, 1850-1980, 1,100 names have been used for post offices. There were 16 in existence in 1869 when Wyoming became a territory and over 200 at the time of statehood in 1890. Currently, there are about 153 post offices. 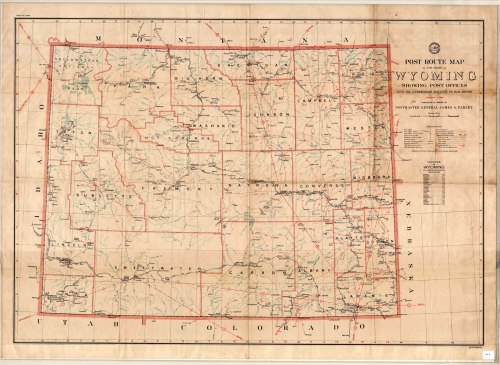 51 years ago today, on September 25, 1963, President John F. Kennedy spoke at the University of Wyoming.

JFK waving to the crowd with Gale McGee in back seat as the Presidential Motorcade arrives at the Field House.
(WSA WY Game & Fish Neg 4695A)

His stop in Laramie was one of three that day in the Cowboy State. He first stopped in Cheyenne long enough to step off Air Force One, wave to the crowd and shake hands. He then boarded the plane again and flew to Laramie. At Laramie, the President was at greeted Brees Field by Governor Cliff Hansen and Senator Gale McGee.

President Kennedy arrived at the University of Wyoming Field House in an open convertible, very reminiscent of the one he would use in Dallas less than 2 months later. The President gave a short speech on natural resources and resource development to the nearly 13,000 people packed into the Field House and then returned to Air Force One for the final leg of his journey to the area around Jackson. The home of Governor Hansen, Jackson was considered a Republican stronghold in the state at the time and the Laramie Boomerang reported only 114 registered Democrats in all of Teton County.

The paper also mentioned that the democratic president would be “benefiting from the philanthropy of the Rockefeller Family,” pointing out that the lodge he would stay at and the National Park surrounding it was in a large part made possible by money provided by John D. Rockefeller. Jr. Rockefeller’s son, Nelson, was speculated to be a possible Republican opponent to the president in the 1964 presidential election. 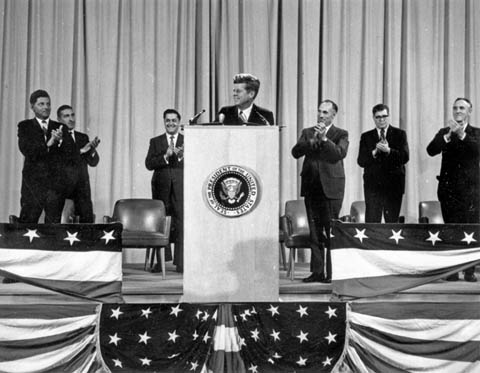 His well-choreographed visit to Laramie lasted only about 45 minutes from landing to takeoff. It is interesting to note that he did not dawdle, leaving Laramie 7 minutes ahead of schedule and ended his day nearly half an hour ahead when he retired early to his room at Jackson Lake Lodge.

You can read President Kennedy’s speech and see his note cards on the JFK Presidential Library’s website. Two short videos of footage from his visit to Laramie are also available on YouTube here and here.

Filed under Presidential Visits, This Day in Wyoming History...

This gem turned up recently while re-housing our lantern slide collection. It doesn’t look like much from here. In fact it was labeled “unidentified town.”

How times have changed. The wide open plains in this photo are now residential neighborhoods (and there are a lot more trees)
(WSA H55-53/220, colored lantern slide)

But if you take a closer look (or scan it at an absurdly high resolution) the image gets a bit more interesting.

Detail of the lantern slide above. Once the buildings can be identified, it is pretty clear that you are looking south down what would be Capitol Avenue at the back of the Capitol Building.
(WSA H55-53/220)

This picture happens to be of Cheyenne, taken from north of the Capitol Building looking back towards town. The photo was probably taken between 1905 and 1910.

The large building just to the left of the Capitol Building is the Convent and Academy of the Holy Child Jesus, run by sisters from the Society of the Holy Child Jesus. The building was completed in 1886, the same year construction began on the Capitol Building, and was replaced in 1952 by the St. Mary’s Grade School building. This lot has since been transferred to the State of Wyoming and is currently being used as a parking lot with the eventual plan to construct a State office building on the site.

The Masonic Temple, built in 1903, is clearly visible on the right. The current roof line of the building is a bit different from this original one, thanks to a fire around 1911.

The road on the far right of the photo is Carey Avenue, thought at the time it was known as Ferguson Avenue. Many of the cattle barons built their mansions along this road, earning it the moniker “Millionaire’s Row.” If you were to follow this road to the north out of this frame, you would find Frontier Park, home of Cheyenne Frontier Days.

Lantern slides like this one were designed to be projected onto a screen or wall. The blue and green tinting of the slides was an attempt to make it look more realistic in the era before true color photographs.

As Princess America II, Jim toured the country on her way to the annual pageant in Atlantic City, New Jersey. Whether she was there to compete or simply to appear in not known. She stopped at several towns along the route for official appearances, but apparently did not speak at many. Her traveling companion and chaperon was Miss Avis Lobdell, a representative from the Union Pacific Railroad.

On her return trip, she was met in Cheyenne at the Union Pacific Depot by a stagecoach and several local representatives, including Judge Fred L. Blume, acting for Governor Nellie Tayloe Ross, and Sam M. Thompson, acting for Cheyenne mayor John Riner.

After lunch with the Kiwanis club at the Plains Hotel, Princess Jim was shown the town from the stagecoach before she boarded the train for Salt Lake City.

We regret to inform you that today is Opposite Day! To celebrate, we’d like to share a letter from the collection, written (how else?) backwards.

This letter was written November 8, 1878, from “George” to his brother “Jim” while George was recovering from a steamboat accident near  that almost took off his right arm. George tells his brother that he regrets that he cannot write a longer letter, but he is writing with his left hand and thus backwards. 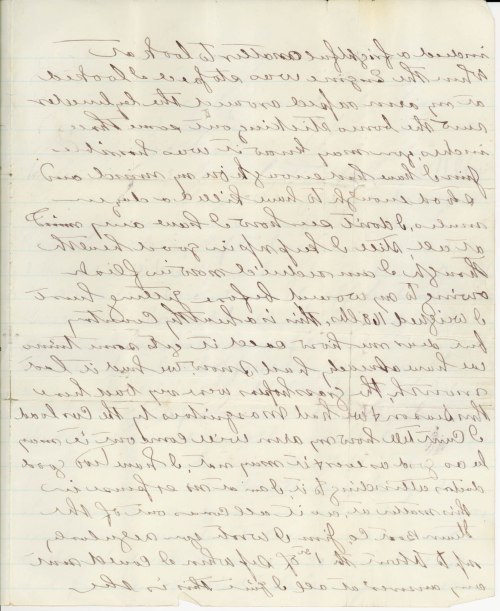 On This Day In Wyoming History… 1894: Wyoming’s First Jewish Wedding

Mazzal tov to the happy couple! On September 5, 1894, the first Jewish wedding in Wyoming as officiated in Cheyenne, making today the couple’s 120th anniversary. Louis D. Jacobs married Miss Sylvia Adamsky at her parent’s home. The ceremony was officiated by Rabbi H. Saft of St. Louis, Missouri, who was also Louis’ uncle.

Louis and Sylvia had met in Cheyenne, where she had grown up. Louis’ family had briefly lived in Cheyenne before moving to Deadwood. They had both attended Cheyenne High School and Sylvia had graduated from there in 1888 with a stellar academic record. She was well-known around Cheyenne as a stellar speaker and musician. Louis was a budding salesman in South Dakota.

The event was auspicious enough to be described in detail in both Cheyenne newspapers. The chuppa, or ceremonial wedding tent, was held by four young men, two of whom also served as official witnesses, and the service was conducted in a mix of Hebrew and English.

The newspaper accounts of the wedding included a short introduction of the couple, a description of the ceremony as well as a list of the wedding presents received by the bride and groom.
(WSA Cheyenne Daily Leader September 6, 1894 p3)

After the ceremony, the couple honeymooned in Illinois before settling in Deadwood, South Dakota. Their happiness was unfortunately short-lived. Louis died in 1903 from pneumonia, leaving Silvia to care for their 2 small boys, Ralph and Morris.

“You Push The Button, We Do The Rest”: George Eastman’s 1st Box Cameras

On September 4, 1888, George Eastman received a patent for his box camera. Photography was by no means a new concept, but Eastman’s new invention made it a fun and reasonably affordable hobby for the masses. 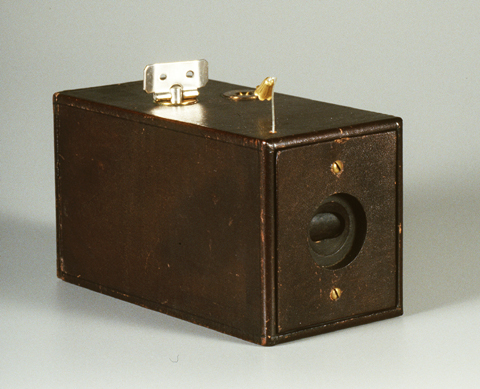 With this simple wooden box, anyone could now take a picture and be fairly certain of the results. For $25 (about $640 today), you could purchase the camera which was pre-loaded with 100 frames of film. Eastman had developed this paper based roll film a few years early, revolutionizing photography and paving the way for a transition from fragile, heavy glass negatives to light, flexible celluloid based film (which he introduced in 1889).

The cameras were marketed with the tag line “You press the button, we do the rest.” And they were true to their word. The cameras were simple and truly “point and shoot” — no focusing, no adjusting. Once all 100 frames were used, the entire camera was returned to Eastman Kodak where the negatives were developed and pictures printed. The camera, loaded with new film, was sent back with the prints. This meant that budding photographers wouldn’t need to master the darkroom developing techniques or bother with finicky chemicals. 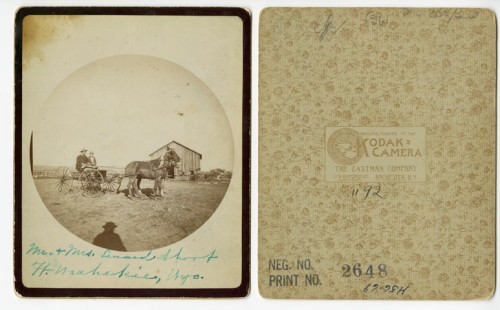 The photos produced by the early Kodak box cameras were round. This one is from a 2nd generation camera. You can even see the photographer’s shadow!
(WSA Carter Print 34, Mr & Mrs Leonard/Lance Short, Fort Washakie, Wyoming, ca 1889)

Filed under Photographic Processes, This Day in Wyoming History...