Presidential Trivia… and A Closure Reminder

Just a reminder that the Wyoming State Archives will be closed on Monday, February 16th to observe President’s Day. 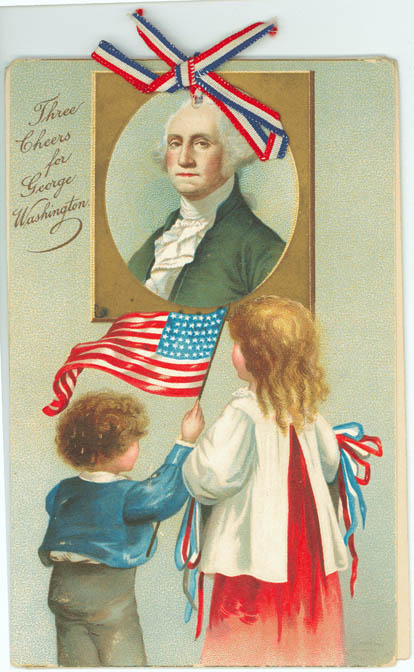 – President Grant was the first sitting president to visit Wyoming Territory. During his second term, he stopped in Cheyenne and spoke at a banquet before continuing on to the West Coast.

– In 1880, President Hays’ son held up the presidential train while he had his hair cut at the Inter Ocean Hotel in Cheyenne.

– President Chester A. Arthur spent most of the month of August 1883 traveling by wagon and horseback from Green River to Livingston, Montana, spending several days exploring Yellowstone National Park. This is the longest visit of a sitting president to the state.

– During his 1903 visit, President Theodore Roosevelt left his train at Laramie and rode on horseback to Cheyenne, stopping to change horses and visit ranches along the way. (Everyone wanted the honor of saying that he had ridden one of their horses.)

– In 1963, President John F. Kennedy spoke at the University of Wyoming field house less than two months before he was assassinated in Dallas.

– President George H.W. Bush spoke on the Capitol Building grounds at the statehood centennial celebrations in 1990.

Governor B.B. Brooks. He was not camera shy and he can be seen in many photographs dating from his term in office until his death.
(WSA Sub Neg 1482)

Bryant B. Brooks, Wyoming’s seventh state governor, was born on February 5, 1861 in the small town of Bernardston, MA. After the Chicago fire of 1871, the Brooks family moved to the Windy City where his father, a lock manufacturer, took advantage of the demand during the city’s rebuilding efforts. Brooks attended a business college there.

Not long after graduating, he headed west and spent some time on his father’s cousin’s farm in Nebraska. In the spring of 1880 he took a train to Cheyenne, where he signed up with an outfit hired to roundup cattle that had wintered in the Snake River region of Idaho. After the roundup, he returned to Chicago for a brief stay to study assaying, then resumed cowboy life in Wyoming, trapping to supplement his income.

In his memoirs, Brooks stated that he settled in the location that would eventually become his ranch site, about 20 miles southeast of present day Casper, after acquiring a trapper’s cabin for six beaver traps and a sack of flour. A ranch house was constructed in 1883. He partnered with his father and brother under the business name B.B. Brooks & Co. The company started with 80 heifers shipped from Wisconsin.

Brooks married Mary Naomi Willard, daughter of his father’s cousin, in 1886 and the couple settled in at the ranch, which would eventually encompass 7,000 acres.

Brooks’ livestock interests developed and expanded to include other companies and, in 1892, wool growing. He was active in a number of civic and fraternal organizations. He was appointed to a three member commission to organize Natrona County, and served as County Commissioner from 1891to 1892. Brooks was elected to the 2nd state legislature and served as a delegate to the Republican National Convention three times (1896, 1904, and 1908). His political career culminated with his election as Governor to fill the unexpired term of DeForest Richards, who died a few months into his 2nd term.

Brooks was re-elected in 1906. His family had the distinction of being the first to occupy the Governor’s Mansion in Cheyenne.

Correspondence between Governor Brooks and the US Department of Agriculture referring to the opening of the Wind River Reservation for white settlement.
(WSA Gov. Brooks gubernatorial papers, engineering correspondence)

Under the Brooks administration a mineral leasing act was passed, which provided for access to the state’s mineral resources and generated revenue for the state. The leasing of federal lands for grazing was a hotly debated issue during Brooks’ tenure as Governor, in Wyoming and in the nation’s capital. In 1907 he opposed resolutions by the Wyoming Stock Growers Association in favor of leasing. His message to the 1909 state legislature supported the Homestead Act. He spoke against leasing for grazing, believing it would negatively affect homesteading efforts. The debate lasted well beyond Brooks’ gubernatorial years.

Governor Brooks received many requests for his stance on women’s suffrage during his term. This is an example of his response in support of suffrage in the state. In some, he goes so far as to call for women’s suffrage to be adopted on a national scale.
(WSA Gov. Brooks gubernatorial papers, women’s suffrage file)

Brooks continued to expand his business interests after leaving the state’s executive office. He was president of the Wyoming National Bank in Casper. He became president of the Consolidated Royal Oil Company of Casper and of the Grass Creek Oil and Gas Company. He also had interests in other oil companies and served as President of the Rocky Mountain Oil and Gas Association for many years. In this role, he opposed federal plans to suspend the issuance of permits for oil exploration on the public domain in 1929, and in the 1930s supported an oil pipeline between Fort Laramie and Salt Lake City. The line was eventually built despite protests from Wyoming labor organizations, which feared the line would negatively impact railroad employees and laborers in related fields. 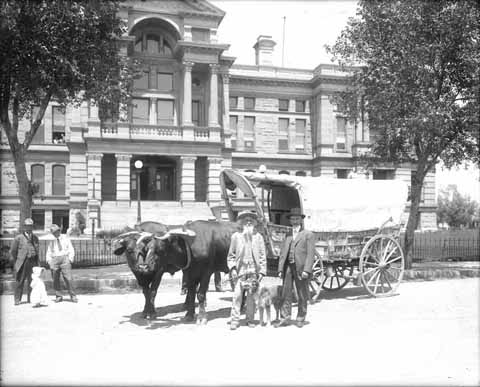 Governor Brooks and Ezra Meeker in front of the Wyoming State Capitol Building. Meeker traveled across the country by oxen and wagon recreating his earlier experiences on the Oregon Trail.
(WSA J.E. Stimson Collection Neg 2870)

Brooks also worked to preserve Wyoming’s historical record as chairman of the Wyoming Historical Landmarks Commission. He had special interest in preserving information about the Oregon Trail and marking its location. Governor Brooks died on December 8, 1944 at his home in Casper.

Brooks speaking at the dedication of the Owen Winster Monument in Medicine Bow, Wyoming on September 21, 1940. (WSA Sub Neg 5720)

In addition to routine records associated with the Governor’s Office, the records of Governor Brooks at the Wyoming State Archives include correspondence related to the opening of the Wind River Reservation to settlement and efforts to irrigate the area, the Hanna mine explosions of 1908, raids on sheep camps, a visit by President Theodore Roosevelt, and woman suffrage. Governor Brooks’ published memoirs are also maintained by the Archives. An inventory of his gubernatorial papers can be found in the Rocky Mountain Online Archives (RMOA).

Telegram from Governor Brooks to Senator Enoch Vaughn expressing sympathy for the lives lost during the mine explosion at Hanna. He would later write more formally.
(WSA Gov. Brooks gubernatorial papers, Hanna Mine Disaster file)

Filed under This Day in Wyoming History..., Wyoming Governors