This Day in US History… 1865: “Ring the Alarm Bells, Murder and Treason”

We continue this month’s series of diary entries from Isabella Wunderly Campbell, who became Wyoming’s first lady in 1872. Isabella was a 19 year old  living in Washington, D.C., during the eventful April of 1865. Her daily diary entries give insight into her experiences during the final days of the Civil War, which ended 150 years ago this month. 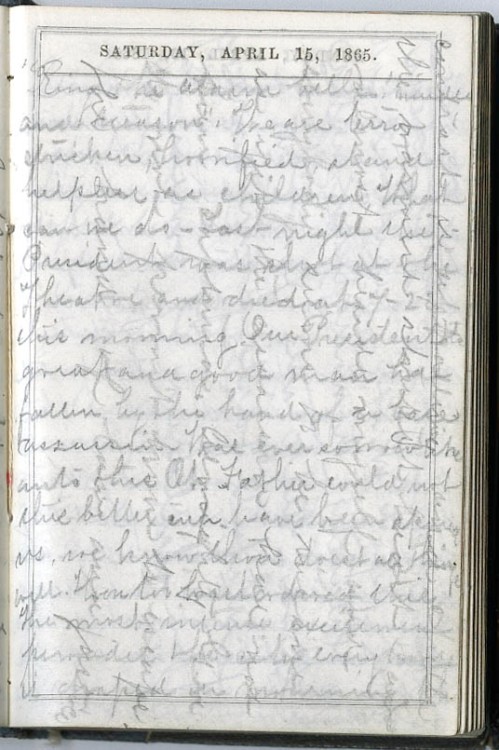 “Ring the alarm bells, murder and treason” We are terror stricken, horrified, stand helpless as children. What can we do – Last night the President was shot at the Theatre and died at 7-22 this morning. Our President the great and good man has fallen by the hand of a base assassin. Was ever sorrow like unto this? Oh Father could not this bitter cup have been spared us. We know thou doest all things well. Thou too hast ordered this. The most intense excitement pervades the city. Every house is draped in mourning. The contrast is appalling and chills the warmest stoutest heart. I am almost beside myself and everybody seems to be insane. As yet the assassin has not been captured. Almighty God, do not permit him to escape the hand of law and justice.

Following the excitement and festive air of the Grand Illumination only two days earlier, the city turns black with mourning upon the news of President Lincoln’s death.

Filed under Eyewitness to History, This Day in Wyoming History..., WSA Collection Highlights, Wyoming at War

One response to “This Day in US History… 1865: “Ring the Alarm Bells, Murder and Treason””