Leslie Andrew Miller was born in Junction City, Kansas on January 29, 1886. His parents moved to Denver, Colorado, and then to Laramie, Wyoming, where he attended the public schools through the eighth grade. Additional education was obtained through business courses. Miller was exposed to politics when his father served two terms as Laramie’s mayor. He also distributed handbills promoting a Laramie visit by William Jennings Bryan, Democratic candidate for president, in 1898.

Miller’s first job was as a freight car checker at the Union Pacific yards in Laramie. He was promoted to brakeman in 1906. Three years later he married Margaret Morgan, an employee in his father’s Laramie store. They would have two children (Katherine and John). In 1911, Miller moved to Sheridan to take a job as brakeman for Burlington Northern Railroad. Prior to his move to Sheridan, Miller, a Democrat, ran one unsuccessful and one successful (1910) campaign for election to the Wyoming House of Representatives. His mother would succeed him as an Albany County representative. Anna B. Miller served in the 1913 legislature. Leslie Miller would serve in the state legislature in each of the next four decades (1911-1912, 1923-1924, 1929-1930, and 1945-1948) and was the first legislator to serve in both houses. 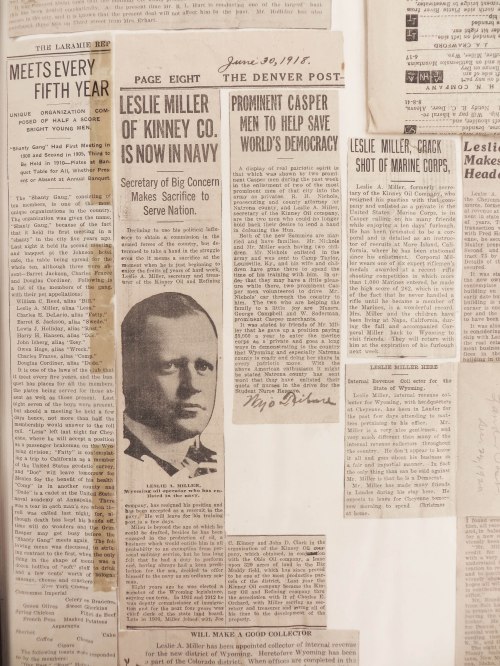 In 1918, Miller gave up his position as secretary and treasurer at Kinney Oil and Refining Co. to join the U.S. Navy and serve during World War I. Following the war, he was very active in the American Legion.
(WSA H70-140, scrapbook 1)

The Sheridan job turned out to be part time work, so Miller traveled to Cheyenne to apply for re-employment with Union Pacific. Instead, a friend helped him get a job with the State Board of Immigration, beginning an off and on career of public service. The state job was short-lived and employment over the next ten years consisted of a wide range of experiences: Cheyenne Daily Leader, secretary to a Casper Oil Company, Marine Corps drill sergeant, and Wyoming’s first Internal Revenue Service collector. Miller also began a market firm called Aero Oil Company, which he sold in 1927. He started a similar business two years later under the name Chief Oil.

In 1922, Miller and other oilmen complained to Wyoming Senator John B. Kendrick that Secretary of the Interior Albert Fall had leased oil production rights at Teapot Dome in Natrona County without competitive bidding. Kendrick responded by submitting a Senate resolution calling for the Secretary to answer questions about the leases. The resolution was adopted, triggering a long investigation that resulted in prison sentences for Fall and oilman Harry Sinclair.

Miller ran unsuccessfully for governor in 1930 but was elected governor in 1932 to finish the last two years of the late Governor Emerson‘s term. The world was feeling some of the worst effects of the Great Depression when Miller began his stint as Wyoming’s chief executive. Upon taking office he proposed a number of cutbacks to state expenditures. Additionally, he said he would take a salary cut and would not live in the Governor’s Mansion. Although Wyoming strived to maintain an attitude of self-reliance, the growing needs of its citizens eventually forced the state to appropriate funds for relief and to participate in federal aid programs. At the end of 1933, Governor Miller reported the state had accepted over $95,000 in federal relief grants. A $75,000 appropriation was approved by the state legislature to supplement heavily impacted county funds. 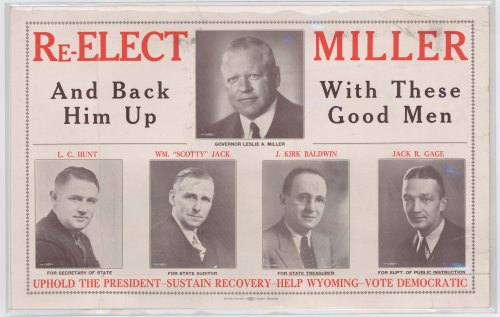 1934 Democratic Party campaign poster. The 1934 election was a success for the Democratic Party. For the first time in Wyoming history, all five state-wide elected offices were won by the party.
(WSA)

Miller was re-elected in 1934, a noteworthy election for the fact it was the only time in the state’s history the Democratic Party won all five elected offices. During his 1935 message to the legislature, Governor Miller stressed that other sources of revenue for the state needed to be found, as property tax revenue would fall short of meeting the need. The lawmakers responded by approving a 2 per cent sales tax on retail purchases. They also provided for the wholesaling of liquor by the state through a newly established Wyoming Liquor Commission. These measures gave a much needed boost to state revenues. 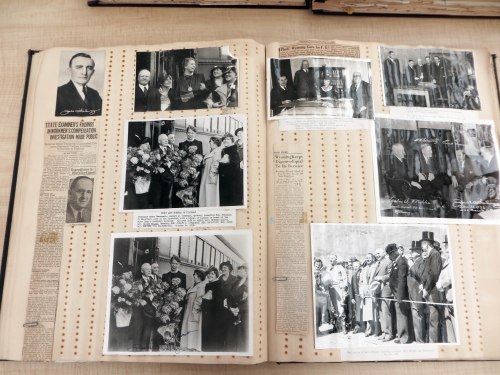 Miller kept several very large scrapbooks which are now housed in the Wyoming State Archives. These albums include newspaper clipping about Miller and his interests, photograph, letters from politicians (including Presidents F. Roosevelt and Hoover), event programs and other mementos. This page shows several photos from President and Mrs. Franklin Roosevelt’s visit to Cheyenne in October 1936. The dahlias presented to Mrs. Roosevelt were probably grown by Miller himself.
(WSA H70-140, Album 2)

Wyoming government continued its frugal ways in 1937. Despite hopeful economic signs, Miller cut the budget approved by the legislature by over $300,000. His recommendations for a sales tax increase and a constitutional amendment allowing for the establishment of a graduated income tax were not heeded.
In 1938, Miller campaigned for election to a third term as governor, a feat that would have been unprecedented to that time. However, internal issues with the Democratic Party, disagreements among the elected officials, public displeasure with the sales tax, and failure to reduce gasoline prices contributed to his defeat. Republican Nels Smith, a Weston County rancher with relatively little political experience, won the election.

During the 1940s, Miller served on the Democratic National Committee, the War Production Board, and as chairman of the Hoover Commission’s Task Force on Natural Resources. His work on the Task Force was lauded by former President Hoover. It included an indictment of the wastefulness of Army Corps of Engineers and Bureau of Reclamation projects. He later served as director for Resources of the Future, an organization which researched natural resource issues.

Governor Miller was an avid gardener and gladiolus and dahlias were some of his favorites to grow. Here he is with a spectacular 11-inch diameter specimen he planted outside the Capitol Building. August 21, 1938.
(WSA P87-22/83)

Governor Miller died on September 29, 1970 in Cheyenne, Wyoming. He was remembered as an able, yet humble, statesman who effectively governed the state through the Great Depression and whose advice and services were sought by many leaders and interest groups long after his years as Wyoming’s governor.
The records of Governor Miller‘s terms in office available at the Wyoming State Archives include: Information on water and soil conservation; National Emergency Council for Wyoming report, 1935; a state budget for 1933-1935; an expense register; proclamations; requisitions and extraditions; military training schedules for 1936; and a memorandum to state legislators concerning appropriations. Governor Miller’s memoirs are also available.

Filed under This Day in Wyoming History..., Wyoming Governors