The Wyoming State Archives is delighted to announce that we have accepted the one millionth document into our Digital Archives!  We are celebrating the exponential growth of this secure storage method for the state’s valuable records.

In 2013, the Wyoming State Archives began working in collaboration with the state’s Enterprise Technology Services experts on the best solution for safely and securely housing the state’s digital public records.  We found the solution in the Wyoming Digital Archives, a military-grade storage database for public records, the documents that reflect the work of Wyoming’s government. This includes both permanent records and other documents with long-term value, which were either “born digital” (not created on paper) or digitized.

To date, the Digital Archives boasts one hundred licensed security levels, allowing customized access for a variety of users, from the Governor to staff in government offices across Wyoming at the state and local level. At a nominal cost, it provides agencies a way to preserve and manage their electronic records in much the same way the State Records Center and State Archives preserve and manage paper records.

Documents added to the Digital Archives are available to the agency’s staff using a web interface with keyword search ability, drastically decreasing the time needed to access older records. Access restrictions can be set by agencies to protect confidential documents and information as needed and to document changes made to the files. The system also includes a page where anyone can search for publicly accessible documents.

Wyoming Digital Archives by the numbers:

For further information, check out our website at wyoarchives.wyo.gov; or contact Kathy Marquis, State Archivist at the Wyoming State Archives, 2301 Central Ave, Cheyenne WY 82002.  You can also call 307-777-8691 or message her at Kathy.marquis@wyo.gov. 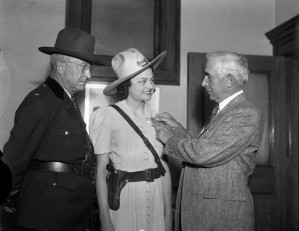 Ed Warren was elected mayor of Cheyenne in 1940 and served two terms. Prior to being mayor Ed Warren was a successful  vaudeville performer. At the pinnacle of his career Ed played the Palace Theater in New York City.

Ed and his two sisters were introduced to show business when they were children by one Fred Stone. Stone was a top notch circus performer, a star of vaudeville, a Broadway musical stage actor who played the scarecrow in the 1903 stage musical of the “Wizard of Oz” and eventually he starred in movies such as “The Duke of Chimney Butte,” “Billy Jim,” and “Johnny Get Your Gun”, to name a few.

The show business bug bit Ed and his sisters and they started performing vaudeville acts; they sang, danced and did acrobatics. At one point Ed adopted the stage name Ed Warren. His full name was Ed Warren Leisenring, but he felt his last name was too much of a mouthful so he dropped it. For the first few years of vaudeville performing Ed and his sisters were accompanied by their parents, but as the children got older they began to perform on their own. Ed lost a member of his troupe when one of his sisters became Mrs. Peter Appel Sr. of Cheyenne. In 1915 he lost his most prominent scene partner, Lillian, when she married a Chugwater rancher by the name of Curtis Templin.

After he lost his sisters to marriage Ed continued performing on his own, but sometimes he would join his act with Charles O’Brien or Dill Templeton’s performances. Some of Ed’s favorite performing memories were playing the Palace Theater in New York  and sharing review honors with May Irwin, a Canadian vaudeville star.

Due to his time on the stage Ed came away with friends such as baseball star pitcher Cy Young, player Bill Donovan, pitcher Ed Walsh and boxers Bob Fitzsimmons, John Mcgraw, and Abe Attell. He was also good friends with comedian Fred Allen who would tease Ed in letters about his love of cigars.

In 1909 Ed’s vaudeville act played the old Atlas Theater on 16th street in Cheyenne. Something about Cheyenne captured Ed’s imagination, and he decided to make the town his home. He would return during the summers, and eventually he moved there permanently. In addition to being elected mayor he was a former city commissioner and he sold Cheyenne real estate.[1]

The Wyoming State Archives has in its holdings some of Ed Warren’s sheet music for his performances with Charles O’Brien.

According to the November 14, 1939 Casper Star Tribune Ed Warren was the third Mayor in Cheyenne history who had been on Broadway. The article did not name the previous two mayors who had bathed in the lights of Broadway.[2]