Lola West was the owner of the successful Black and Tan Cafe, a popular destination for African American Cheyenne residents and Fort FE Warren soldiers. She was a key witness in the 1944 case against Mayor of Cheyenne Ira L. Hanna, Chief of Police Jess B. Ekdall, Captain Gerald J. Morris and Sergeant E.K. Violette of the Cheyenne police force for soliciting and accepting bribes. Her eye witness testimony and her foresight in marking down the serial numbers of the bills she used to pay one of her $100 “protection” money payoffs were instrumental in the conviction of these men.

West was born on January 3, 1892, in Arkansas. We know Lola came to Wyoming with her husband William H. West sometime around 1925. The couple is first mentioned in the 1926 Cheyenne City Directory. West is marked as the head of the house in the 1930 Federal Census and the 1940 Federal Census. It is unclear what happened to William. We don’t know if he died, the most likely scenario, or if he and West separated. 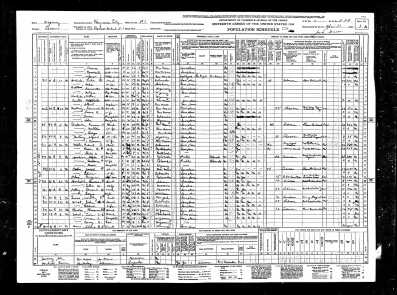 West is entered as head of the household on line 27 of the 1940 Federal Census.

West became embroiled in Mayor Hanna’s bribery scandal on March 1, 1944. West was a key witness for the prosecution. She testified that on March 1 Ekdall and Morris came to her establishment, the Black and Tan Cafe, and said, “they were going to open up the town.” They asked her if she wanted to get in on it. At the time West was boarding soldiers’ wives at the Black and Tan where she had 14 rooms to rent. West was part of a small community of African Americans who all lived on the West side of Cheyenne. Due to Cheyenne’s subtle segregation, West’s soldiers’ wives were, most likely, African-American. West’s establishment would have been one of the only places in Cheyenne where they could live.

When West disclosed this information to Morris he told her to “get some women open the doors, start some gambling and get some liquor.” She was also told if the soldiers’ wives living with her wouldn’t “hustle” to throw them out and get some girls who would. Morris and Ekdall left but then returned around 7 p.m. to ask her how much she could pay. They needed to make a report to the Chief and the Mayor. West was told to have money ready, and “no arguments either,” and to bring her money to W.C. (Pop) Grimes’ Porters and Waiters Club. Grimes was also a key witness for the prosecution. West testified the payment “wasn’t a fine. It was like a tax. It was a payoff.”

West made payments of $100 each on March 4 and March 17. Lola said all four of the defendants were in the room for the transactions. She claimed when she asked what she was paying protection money for the reply was it would allow her to have liquor, gambling, and prostitution at her establishment without a license.

Unbeknownst to Mayor Hanna and his partners West was approached by three federal investigators from the Alcohol Tax Unit to help with a sting operation. L.D. Parker and Fred M. Taylor, two of the investigators with the Alcohol Tax Unit, testified to witnessing a $100 payoff from West. Parker and Taylor were concealed in a room in the Porters and Waiters’ Club and saw Lola West count out the money and place it on the desk in Grime’s office. Sergeant Violette picked it up, and Mayor Hanna said he would count it later.

Parker testified that earlier in the evening he saw West and Grimes talking to Violette and Morris. She complained the $100 was too steep a price and she wanted to speak to the Chief or the Mayor before she paid that much money. Hanna and Ekdall arrived later around ten. Ekdall asked Lola what the trouble was and she told him she didn’t have any ‘girls’, no gambling or liquor and she couldn’t afford to pay the $100. Lola also said she was told she would only have to pay $50. Lola did admit to the federal investigators she sold beer without a license.

West was an African-American businesswoman who challenged the powerful white men of Cheyenne. After the trial, she moved on with her life in Cheyenne. There is hardly anything in the historical record that mentions West before or after the trial. Her name did show up in a 1950 court docket. She was fined for selling liquor without a license. Lola West died at 83 years old on August 24, 1975. According to the notice in the Wyoming State Tribune Lola left behind a large family: six children, 20 grandchildren, 38 great-grandchildren, and two great-great-grandchildren. She is buried in Lakeview Cemetery in Cheyenne.