William Brown: The Convict That Got Away

William Brown was an inmate at the Wyoming State Penitentiary from 1917 to 1920.  He has a unique standing in the annals of the Penitentiary in that he escaped and was never apprehended.

Born in 1896, Brown was raised on a farm in rural Michigan, received an eighth grade education, and married a local girl.  At just shy of six feet tall, he was of slight build, pleasant looking young man. He apparently left his wife to seek his fortune in the West, probably with the intent of sending for her later.  According to Penitentiary records, Brown listed his occupation as a ranch hand though there is no evidence he did such labor. Another account described him as a “would be” cowboy. At the time of his arrest, he was working as a clerk at the Normandie Hotel in Cheyenne.

On December 7, 1917, Brown and two unscrupulous acquaintances kidnapped Gust Kondaks, a Greek taxi cab driver and ordered Kondaks to drive them to Texas.  About 10 miles south of Cheyenne, for reasons that are not clear, Brown decided Kondaks was no longer needed and shot Kondaks twice, killing him. Kondaks’ body was discovered a couple of days later in a snowbank.  About 10 days later, Kondaks’ kidnappers were arrested in El Paso, Texas. They were brought back to Cheyenne and were summarily tried and convicted. Because he killed Kondaks, Brown was found guilty of second degree murder and sentenced on April 3, 1918 to 25 to 30 years.

Within a couple years, Brown conducted himself accordingly.  Through the influential persuasion of his parents before the state parole board, Brown’s sentence was commuted to 6 to 8 years.  Because he was a model inmate, he was transferred to a state road camp in Hot Springs County on April 11, 1920.

Brown’s family members tried  to bolster his spirits by writing to him often.  To their dismay, he wrote infrequently. His mother begged him to do otherwise.  A brother, probably looking for something to say, wrote awkwardly with standard pat questions, “How are you anyway and what are you doing? . . . Have you any idea when you will be home? Am glad you are doing so nicely now.”  His wife inquired about his work and condition, and let him know that their little boy, Martin, was doing fine and wanted to write his daddy. Little did anyone know that Brown had decided to take his fate into his own hands.

On August 15, 1920, Brown escaped from the road camp.   Concerned after receiving this news, Warden Frank Hadsell held Sheriff H.E. Holdrege responsible for Brown’s escape.  “Will you kindly inform what effort you made to apprehend Brown” Hadsell wrote. “I don’t want to get into your game but I want this man.”  Hadsell believed Brown would go north and cross into Canada. To make matters worse, both men learned that Brown had stolen a saddle and a horse and killed a sheepherder, Frank Belcher, in Park County.

After learning about Brown’s escape, Sheriff Holdredge immediately started a search.  He later personally posted a $100 reward for his arrest, and circulated a wanted poster in the northwest and Canada. Holdrege also enlisted the cooperation of the US Postal Service.  By intercepting the mail of Brown’s family members, officials hoped to locate and apprehend him.

But it was all for naught.  A year passed and Brown was still at loose.  Moreover, his family had no idea where he was.  Believing he would only create trouble for her if he should return, his wife divorced him in September 1921.

Brown was never apprehended and his whereabouts were never discovered. 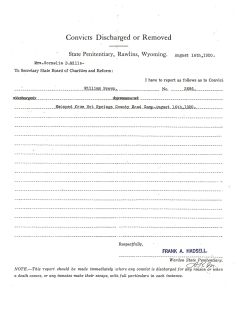 On February 1, 1936, Warden Alex McPherson finally gave up the search and reluctantly notified Governor Leslie A. Miller that, for administrative purposes, Brown was officially discharged from the Penitentiary.

Like many modern challenges, homelessness is nothing new, including here in Wyoming.  To grow and prosper, Wyoming communities encouraged ambitious, enterprising and hard-working people to come to Wyoming.  Eagerly sought were laborers, farmers, and investors. Over time, much of Wyoming as well as western history would be dominated by images of individuals who embodied rugged individualism, the Protestant work ethnic and the entrepreneurial spirit.  But there was one element of society that was least desired and most detested – vagrants.

A vagrant is defined as a person without a home or regular employment or income who wanders from place to place, usually at the expense of local charity.  Vagrants were often portrayed as social misfits or unwanted outsiders. In colonial times, individuals who did not have some kind of gainful employment were asked to leave town or face prosecution.  Such was the legal heritage that would become an integral part of Wyoming’s criminal code.

Vagrancy was endemic to most communities but particularly during the winter months and difficult economic times.   Unemployed, disheveled persons idling and sleeping in sheds, saloons, and open spaces created an unsightly image to travelers and presented an image contrary to the clean, vibrant and prosperous city that public officials wanted to convey.

To curb the presence of this unwanted element, the territory of Wyoming passed a vagrancy statute in 1876 imposing a fine of $100 or imprisonment for up to three months or both.  Complementing this statute, as well being part of community’s ongoing efforts to maintain an orderly and attractive atmosphere, Wyoming cities and towns usually instituted a vagrancy ordinance.  Municipal codes imposed a fine of up to but not more than $100. Since the individual was likely a pauper, the fine could be worked off by laboring in the streets at a cost of $1.00 per day. If the fine could not be paid, jail time up to 60 days could be imposed.  The responsibility for dealing with vagrants fell to police and sheriff’s officers and judges.

Entries for vagrancy dot the pages of municipal court dockets and city and county sheriff’s jail registers.  Unfortunately, there is no substantive information about the individual of record, such as their age, background, or previous place or residence.   Whether the individuals were down and out, petty criminals or freebooters is impossible to determine. According to some newspaper articles, a handful of individuals appear to have been colorful characters well known in the community.  But most people are nothing more than shadowy figures on paper.

Today we seek causes or “cures” for homelessness.  In these earlier days, a temporary, if unintended solution was found.  On the surface, the punishment meted out seems severe. But upon closer examination, there was some irony.  Given that the arrested individual had no money or livelihood, trying to collect a fine was like getting blood from a turnip.  Imprisonment did not impose any pecuniary or personal hardships. Moreover, by trying to prevent vagrants from being a social nuisance and a burden to local charities, the local government ended up providing housing and care at the public taxpayer’s expense.

In the 1929 film The Cocoanuts, Groucho Marx, playing the part of a would-be real estate developer, shows a city map to his brother Chico, playing the part of the confidence man, and says, “Now here is the main road leading out of Cocoanut Manor.  That’s the road I wish you were on.” Marx’s sarcastic remark was actually a real choice for dealing with vagrants.  According to local ordinances, vagrants could be granted an early release if they promised to leave the community and not return in 12 months.   For many local officials, this was a pragmatic solution because it saved public money and time that would otherwise be expended on food and shelter.  By sending vagrants out of town, however, they remained homeless and became a problem for the next community.

Filed under Crime and Criminals, Vagrancy