Today’s Wyo Whiskers installment was called the “Grand Old Man of Wyoming” and used his considerable political influence to draft national legislation promoting irrigation projects in the arid West and to bring investors and settlers to the state.

Joseph Maull Carey, was born in Milton, Delaware, January 19,1845. His parents were well established farmers and able to provide him with an excellent education. After two years of college, Carey went to the University of Pennsylvania and obtained a law degree in 1867. Carey was an active political participant from his youth and enthusiastically worked for U.S. Grant’s campaign for the presidency. President Grant rewarded the ambitious young Carey with the appointment of U.S. District Attorney for Wyoming. He worked hard and soon became the U.S. Associate Justice to the Supreme Court of Wyoming. Carey kept the title of judge for the rest of his life in spite of all the other positions he held throughout his lifetime. 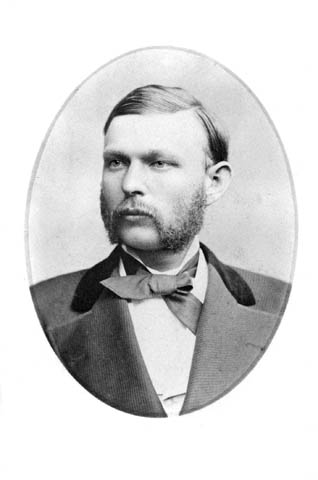 He tired of public life for a time in 1879 and began a successful ranching and business career with his brother under the name Carey Brothers in central Wyoming. Their cattle were some of the first of the large herds to winter in Wyoming, showing that full time, large scale cattle operations were possible in the state. The post office that served the ranch was called Careyhurst, after one of their ranches, and is now located in Converse County.

Judge Carey residence in 1884, 2119 Ferguson Avenue. Ferguson Avenue was known as “Millionaires’ Row” because of the impressive mansions, like the Careys’, that lined the street.
(WSA Sub Neg 8810)

Success in business propelled him back into civic life and he was elected mayor of Cheyenne in 1881, a position he held until 1885. Devoted  bringing civilization and culture to Cheyenne, Carey helped to organize the Cheyenne Opera House and the Laramie County Library Association. He also served as president of the Wyoming Stock Growers Association for many years  and served as the first president of the Stock Grower’s National Bank of Cheyenne. As thanks for his service and influence, Ferguson Avenue, on which his palatial mansion stood, was renamed Carey Avenue in his honor.

As the delegate to Congress for the Wyoming Territory, Carey authored the bill to admit Wyoming to statehood and fought valiantly for its passage. Legend has it that Carey and the Wyoming delegation told congress that ‘Wyoming would wait 100 years for statehood rather than join without women’s suffrage.’ The was signed into law on July 10, 1890 and Carey was given the honor of sending the telegram to acting governor John W. Meldrum declaring the victory. 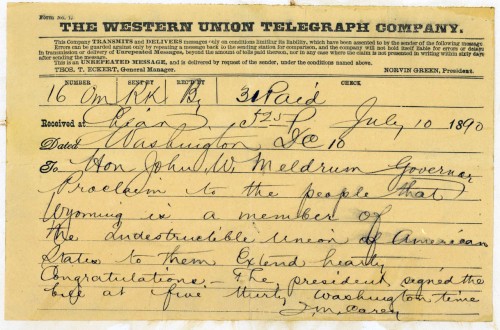 Judge Carey was rewarded for his efforts by being elected the first U.S. Senator from Wyoming on November 12, 1890. He served as U.S. Senator from 1890 to March 3, 1895. His “Carey Act of 1894,” officially known as the Federal Desert Land Act, created the General Land Office and provided for the return of millions of acres of land to the individual states by the Federal government for reclamation by irrigation projects. Carey had organized the Wyoming Development Company, Wyoming’s first irrigation project and much of the regulation for the WDC was copied for other irrigation projects around the region.

Following his loss to Francis E. Warren, he returned to Wyoming and practiced law until his election as Governor for the 1911-1915 term. The legendary rivalry between Warren and Carey had existed on nearly every front for many years. Their cattle herds fought for forage and their political careers cast them as rivals in influence, if not out right opponents, in many races.  Both men were members of the Republican Party, but Carey switched to the Democratic Party after failing to win the Warren controlled Republican party nomination. Carey was one of seven governors to help form the new Progressive Party to reelect Theodore Roosevelt in the 1912 presidential election.

As governor, Carey stressed settlement of Wyoming’s open spaces through irrigation projects and immigration campaigns to attract new residents and investors. In his 1911 State of the State speech to the Legislature, Carey called for the organization of new counties, which led to the creation of 7 new counties being added to Wyoming’s 14. The disastrous winter of 1911-12 prompted Carey to reevaluate and caution the 1913 legislature that they may have been too exuberant in creating counties and consider carefully the organization of any new counties. Whether it was his influence or not, Wyoming would add only two more counties in 1921, bring the county count to its present 23. 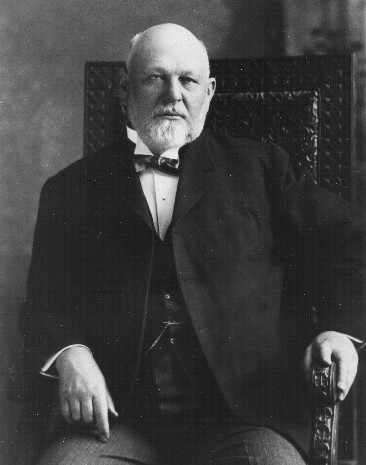 Joseph M. Carey died February 5, 1924, at his home in Cheyenne at age 79 following a long illness. In honor of the accomplishments of the “grand old man,” the Archie Allison, mayor of Cheyenne, called for local businesses to close from 1-3 pm on the day of his funeral and Governor William Ross closed State government for the entire day.

Judge Carey’s son Robert D. followed in his father’s political footsteps, serving as both Governor (1919-1923) and later US Senator (1931-1937). They are the only father and son to fill these positions.  Robert’s brother Charles D. graduated from Yale before returning to Wyoming and joining his father in running the ranching empire. Charles used the CY Ranch 25 miles north of Cheyenne as his headquarters and was an active member of the Wyoming Stock Growers Association. He and his third wife were killed in an auto accident just outside of downtown Cheyenne in 1935.

In 1959, Judge Carey was inducted into the National Cowboy Hall of Fame. F.E. Warren also holds this distinction, as does John B. Kendrick.